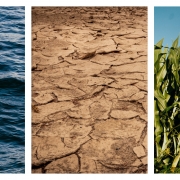 Using the 2012 Midwest drought as a case study, Princeton researchers attempt to answer this question.

The weather in the Midwest United States is known for being dynamic, with temperatures and precipitation amounts that can vary greatly from season to season, and even day by day. This makes forecasting weather in the Midwest more difficult to predict than places on the coasts, especially when using seasonal forecast models. Since seasonal forecast models are probabilistic models that rely on ocean temperatures as input data, the farther landlocked a place is, like the Midwest US, the more difficult it is to predict temperature or precipitation probabilities. Researchers at Princeton published a study in Environmental Research Letters in March of 2014, focusing on how being able to predict sea surface temperatures (SSTs) affected forecasting the 2012 Midwest drought.

Comparing one of their models, the NMME, with their own SVD algebraic analysis, the researchers write,

“During spring, the observational data show a weak coupling pattern between global SSTs and CONUS precipitation. However, the NMME models show a much stronger coupling. This is similar to the SVD results for summer, with the model coupling much stronger. The spring SVD analysis of observations confirms that SSTs were not a dominant driver for the 2012 drought, but more than half of the NMME models forecasted the 2012 drought for the wrong reason: a strong coupling with SSTs…The onset of the 2012 drought actually occurred in mid-May, and therefore the strong coupling with SSTs also hampered the forecast of the onset of the drought.”

Between the NMME models and SVD analysis, we know SSTs and precipitation in the CONUS are very loosely correlated. Nevertheless, since the model coupling between the two phenomena was much stronger than what occurred, it can be inferred that SSTs may be a cause but are not the dominant cause for the drought.

This begs the question: Did knowing and being able to predict sea surface temperatures hinder forecasts for the 2012 Midwest drought? Long story short, not necessarily. However, this Princeton study highlights a systematic problem in the models that could hinder future seasonal forecasts, since researchers found that models have a limited ability to predict droughts in correlation with SSTs. In analyzing the SSTs and comparing what the model output showed versus what actually happened, the NMME model predicted the lack of precipitation based on strong coupling with SSTs, when SSTs didn’t actually correlate with the drought at all.

In their concluding analysis, it was determined by the Princeton research group that,

“Therefore, the models are limited in their ability to predict MW precipitation anomalies even at zero month lead time, despite their skill in predicting pan-Pacific SST variability at seasonal or longer time scales. Because Pacific SSTs did not play a major role in the 2012 drought, and droughts in general over the last 30 years, the skillful prediction of Pacific SSTs may actually hinder the prediction of MW summer precipitation due to the underestimation of the variances in the most models and overly strong coupling in two models.”

This site uses cookies. By continuing to browse the site, you are agreeing to our use of cookies.

We may request cookies to be set on your device. We use cookies to let us know when you visit our websites, how you interact with us, to enrich your user experience, and to customize your relationship with our website.

Click on the different category headings to find out more. You can also change some of your preferences. Note that blocking some types of cookies may impact your experience on our websites and the services we are able to offer.

These cookies are strictly necessary to provide you with services available through our website and to use some of its features.

Because these cookies are strictly necessary to deliver the website, you cannot refuse them without impacting how our site functions. You can block or delete them by changing your browser settings and force blocking all cookies on this website.

We also use different external services like Google Webfonts, Google Maps and external Video providers. Since these providers may collect personal data like your IP address we allow you to block them here. Please be aware that this might heavily reduce the functionality and appearance of our site. Changes will take effect once you reload the page.